How do you set up students in Formative? What methods do you use to make sure all students are in the correct class and what are your experiences with signup?

Today is Q3 of our beginning of the year slow chat. We had a great topic yesterday, let’s keep this momentum rolling! This topic is about signup and login. I’ve had some issues in the past (even this year) and am looking forward to some good insight.

This year instead f having students sign up by themselves, I took advantage of the the import from GC feature. This made for a super easy signup/login of even my littlest ones (5th graders). What was even “cooler” is that after re-org (those two weeks where I could have new students or have students removed from my class), I simply re-imported without any issues.

I am not using the post to Gclassroom of the formatives since it creates a “second” entry in my calendar (I post everything in my Gcalendar beforehand for parents and students to know what is coming down the pipeline), and instead have students either log in directly to Formative or post the link on GC and the calendar myself.

We use Google Classroom on our campus so I also use the import from Classroom feature. It is just a click of a button and my students and classes are there! I did find however, that if I did have changes in my class, when I reimported from Classroom, it would add any students that needed to be added, but it did not remove students that needed to be removed. It is easy enough for me to manually remove them, but that is what I would have to do.

Thanks for sharing @mgarcia! I tried the GC import once early on when it was a new feature and I had troubles. Teaching high school is easy enough to just give a code. My problem is that I leave the code on the board and students from other classes enter the incorrect class. Then I end up with duplicates to sort out later.

I give students the code, since I teach high schoolers. I cover up the other class codes on the board so that they don’t accidentally join the wrong one.
My only issue is that it would be nice if there was some type of a transfer option for them. I know that they can easily add to another class, but then removing them from the other would take away work that they could go back and look at. That is important to me as I teach Advanced Placement courses. I had some students switch at semester last year, so I had to make sure that I assigned it to all of my classes at once, instead of just the current ones I had sitting in front of me. Doesn’t work well with a rotating schedule and you don’t see everyone on the same day.

I teach in a virtual program. I just use the direct link since we don’t have Google classrooms. We have our own thing instead. I find that using the direct link works well because then parents don’t think we are doing something else outside of the system and the kids don’t have to remember any codes. I also realize that in this forum, I am not the norm.

I use the class code and it works very well. I have a checklist to make sure that they are all in and dedicate some class time to ensure they are all set up. It has been a fairly smooth process few bumps with e-mails (especially if had in other class), passwords (easy fix), and entering wrong code (easy fix).

I use Google classroom also since it allows me to import my roster of students. The only issue is when a student switches classes to a different period (high school) and then they end up appearing in two different classes. Usually when I manually input grades from formative to my gradebook I’ll catch the duplicates and go back to delete them.

transfer option for them

I agree with this! A manage student section!

Another issue I face that I’d like to be able to deal with is students not matching Canvas or SIS because they have multiple last names. Example: Johannes Diderik van der Waals
Google probably counts the V as the last name but our SIS counts the W so… reordering them or adding an alias would be nice!

I teach middle schools. I put the giant code on the screen using the “add students button” and then "Students will make their own accounts. I have never had issues with students joining he wrong class. Occasionally they mistype their email and I just remove them from the class and re-add them. It is always a good experience because most (97%) students just use “signup with google” 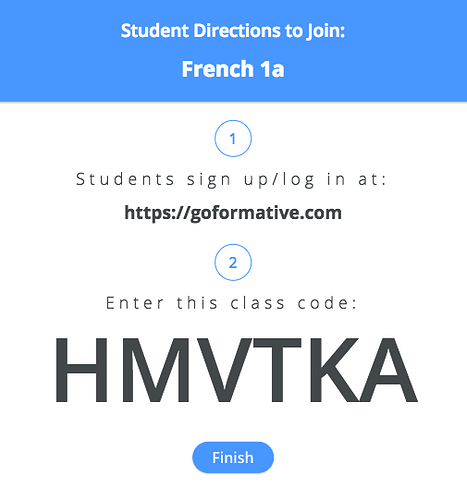 Yes! Sign up with google is the best feature. We are a google school (except we don’t typically use classroom–we use PowerSchool for our LMS), and then it is one less step they have to do. Clicking once is great. I use it for my log in as well!

I have typically used signing up from Google Classroom. However, this year I am finding that the student screens are a bit more cluttered with previous formatives, so it is harder for me to get my littles to know which formative to take. We have worked a lot on the titles and how to use those as clues so far this year

I always made it so that students joined with a code and got a link through Google Classroom to initially join. Afterward, every time they used GoFormative, they would sign in with their Google sign-on and go directly to their Formatives for me.

I use the class code and can embed the Formatives into my PowerSchool Learning page. It would be great if the Formative grade would automatically populate my PSL gradebook. I welcome the day when all of these platforms can speak to each other. “You may say I’m a dreamer, …” with a nod to J Lennon

My only issue is that it would be nice if there was some type of a transfer option for them. I know that they can easily add to another class, but then removing them from the other would take away work that they could go back and look at.

So would you ideally like to control which assignments are able to see regardless of what class they are enrolled in? We’ve considered building in the option to assign a formative to only specific students within a class. Maybe that would meet your need since even if a student switches classes, you could still leave the formative enabled for them in particular?

I’m experiencing this too.

I’m contacting their previous teachers and asking them to remove their old classes. I wonder if there’s a better way?

assign a formative to only specific students

This would be extremely helpful for things like Summative tests. When I have a student who is gone during that time, I have to re-assign the formative to the entire class during the window for that one student to make it up. It leads to a security problem, we have students that will open up summatives and share the content with other students who haven’t taken the test yet.

We end up assigning / un-assigning it after all have completed. Another thing we do to work around this is create a Formative with only answer boxes and no content. Then we print the content but we collect it back. High school age students can get really sneaky!

@david I’m not sure if that would work, or I’m not quite understanding. For example, I teach 4 AP Psychology classes. So they are all typically assigned the same formative, but at different times (I don’t see each class every day). When a student moves from one class to another (schedule changes at semester), they can join the code for the other class, but if I delete them from the other, then all their work goes away. I want them to be able to keep it to study for the AP exam in May. So then if I still have them active in the first class they were signed up for as well as the new one, they will end up being assigned double quizzes.

I hope that all makes sense. Maybe something like making them an inactive participant in one class, so that they aren’t getting assigned the formatives from that one, and still see the ones they completed.

create a Formative with only answer boxes

This is a great idea. How to you stop students from opening other tabs? I haven’t used GoFormative for summative assessments at this time because I’m too concerned with cheating